It was a beautiful day, which I expected to be a wonderful one until I stopped for coffee and overheard an older woman talking about her daughter. All she seemed to have to say about her daughter was how cruel she was to leave her in such desperate need of someone to help her with her life’s needs.

I couldn’t help it, I glanced at the woman. She was well dressed and appeared to be in good health. Yet, she seemed to be saying that her daughter was ignoring her, which was why everything was going wrong in her life. I looked again, as I watched her pay for a cup of coffee with a $100.00 dollar bill. She seemed familiar.

Then I thought to myself, that could be my mother. So, I looked at the woman again, she was my mother. She was talking about me with anyone that would listen to her sobs. I never did understand what was wrong with my mother? She was the one that wanted to murder me, I only wanted her to have what was best. I actually still cared enough for her to make sure that you did not do go without anything. She even had personal aids to assist her with her daily needs. All she had to worry about was entertaining herself. I never ignored her. I bucked all expert advice to not have gone No Contact.

Yes, I mourned her death, the day she decided to beat me until killing some of my facial nerves. My doctors predict that I could go blind or lose my ability to speak as a result of her psychotic fit. In my heart she was dead. Never did I hear an apology until 3 days before she died when she called me to say that she felt that she was at her end. She asked me to come to be with her as she feared dying alone because she had no one else. She stated that she did hit me and that I would be left with a lifetime of guilt if I let her die alone.

She always blamed me for mistreating her as a child with lies that she always cared for me as a loving mother should. All she wanted was for me to feed her needs with my adoration of her greatness. She cared nothing for me. I feel no guilt today for not visiting her because I had already mourned her death. I knew that she was preparing to abuse me with her declarations of innocence. By that time, I had finished allowing her to make me wonder if I remembered my lifetime of abuse correctly. I knew I was of sound mind, she no longer was able to twist the truth. Nor, after her death, were her ashes allowed to touch the threshold of my home. There was no funeral service because there was no one who wanted to say goodbye, her flying monkeys had been abused. She died alone, after living in isolation for the last two years of her life due to her cruel Narcissistic ways allowing negative karma to take over her life.

My mother had all that money could buy.

I left the coffee shop on that sunny afternoon, knowing that my mother saw me, without caring that she didn’t think I was good enough to acknowledge.

When I wrote this, it was 2 years later. On the day that I saw her, my mother’s only worshipper was her golden child, who lived far away. Of course, he called and did what he could to show his adoration for her money during the last years of her life. He visited twice a year for 7 days. Until the day came when he called the police on me claiming I was abusing my mother. That day brought him the truth of what our mother was doing to him and that I had enough evidence to put him in jail, which the police verified when they declared me innocent.   He went home to have a nervous breakdown. The breakdown caused him to become chronically ill. His wife only wanted the inheritance to help her afford to place him in an institution for the rest of his life. The last time I talked to him, he was only 67. Never will he enjoy the money that he had waited for most of his adult life. In addition, I ended up solving the will on my behalf because he and his Narcissistic wife had become afraid of me. I had solid proof given to me by my mother, that she and my brother had committed many horrific crimes to obtain the money that my mother left. Karma catches up with even the worst of Narcissists.

During the last two years of her life, my narcissistic mothers’ needs were fed only by what her money could buy. She stated many times that the caregivers were not good enough for her. She felt that none of them had the intelligence to understand her. Or, did they? One by one, they quit stating that they had been abused by her and, or, that she was too demanding.

Two weeks after I saw her gaslighting me that the coffee shop, she was admitted into the hospital when she couldn’t beg me to visit her because of her beatings and accusations of elder abuse.  I cried to myself because I knew that one day, she would die leaving me forced to live with the fact that my mother cared nothing for me.  Accepting that fact has allowed me the freedom to live for myself, I no longer needed her approval to breathe.  Yet, I will never be too old to stop wondering how different my life would have been if I had a mother who had loved me enough to have wanted the best for me, not just for herself.  When I am old enough to be staring death in the face, I have a feeling that I might talk about her.  I wonder what I will say because I will never admire, love, or miss her. I will only miss the mother I never had.

The pain of abuse never leaves your soul, whether your perpetrator was your mother, father, sibling, partner, or all of them; but you can learn to live with the memories and triggers. If you don’t give up on recovery, you become strong enough to cope with any situation. The chains that hold you to your abuser and past can be unlocked.

Please feel free to message me. I am a Life Coach and Survivor. My goal is to help you find the freedom to live a happy life whether your abuser is alive or dead.

Remember, you are not alone. If you need help, or someone to talk to, please feel free to contact me at any time. I am always here for you with an understanding shoulder to help you “Unstick” yourself from your abuser and past.

Sandra Speer, Ph.D. is a world-renowned Author, Keynote Speaker, and Certified Life Coach and Disaster Recovery Coach who offers Seminars, Group, and Personal Coaching designed to show all how to move beyond their past to live happy and successful lives.  Dr. Speer knows from personal experience as a survivor of a lifetime of abuse, that recovery brings happiness and chances for unlimited success.  As a Legal Advocate, Dr. Speer strives to ensure that abusers are punished.  Nothing makes her happier than watching prosecuting attorneys go to jail, children return to their right parent, and individuals find justice with her assistance.  If you need to charge, fight the system, or in need of making a complaint against a doctor, mental health practitioner, corporation, or institution; Dr. Speer has the experience needed to win your case.  Her publications include “Terrorism Inside America’s Borders,” “The Remains of Hurricane Katrina” with various articles written as a contributing journalist for educational books and publications, FEMA, and the American Red Cross to help all understand Trauma. 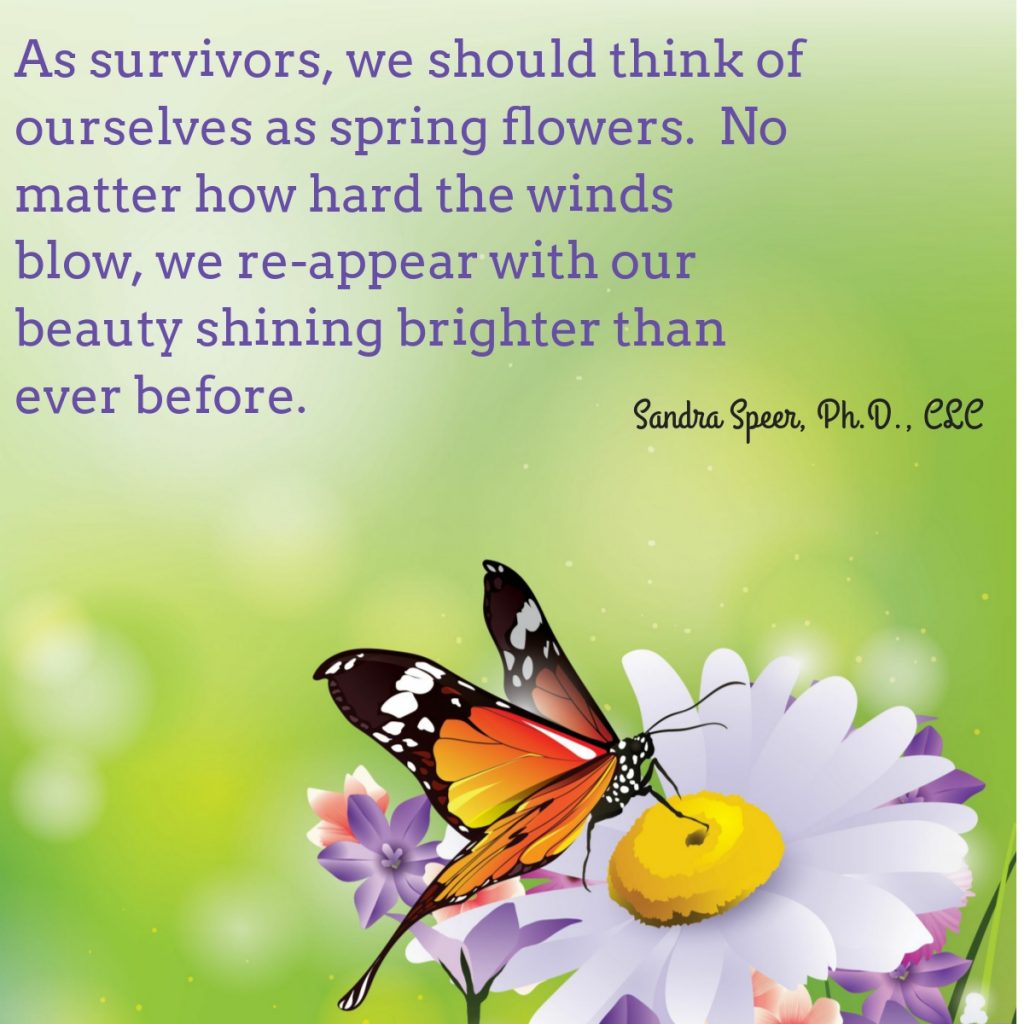